Speaking about the Watford Bridge of Peace in the Middle East

On August 11th, I was invited to speak at a Webinar on ‘The Role of Women in Shaping the Future of the Middle East” Session 2 was on ‘The Role of Women in transcending all boundaries for the sake of a greater good, Peacemaker’. The Women’s Federation for World Peace (WFWP) Middle East had invited eminent women activists from Lebanon, Palestine, Israel and Turkish Cyprus who presented the realities of women in their respective countries and shared their thoughts and endeavours to bring peace in their area. They had heard about the Bridge of Peace in Watford and were interested to find out about our project. 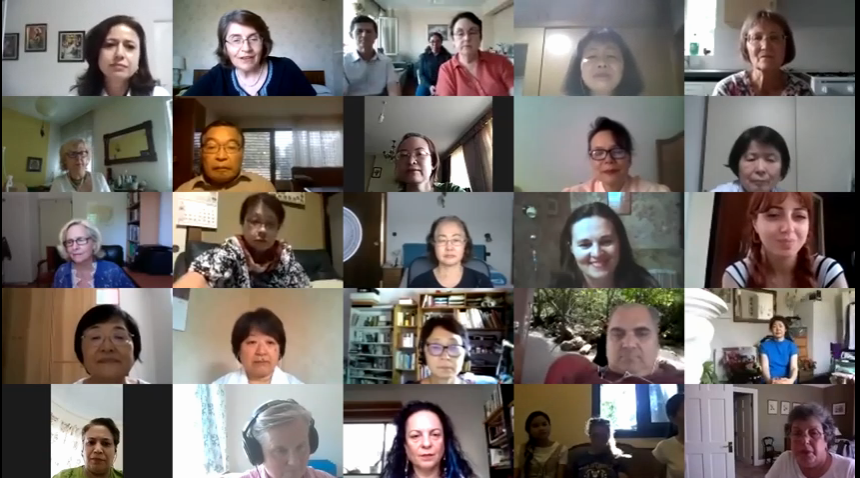 A short video was first presented by a young Lebanese woman politician, and activist. She spoke about the plight of the people in Lebanon after the devastating explosion in Beirut which destroyed 2/3 of the city and how women took a central role in caring for the people in the city and mobilized the youth to bring support and comfort to the victims. The speaker from Palestine spoke about the violence against women and how the Family Protection Unit was formed to protect and reduce violence in the family. The next speaker from Israel reflected that after being an activist for peace for many years: ‘I realized that the basic attitudes to maintain walking the path of Peace and conflicts resolution are determination, tolerance, compassion and love’. The speaker from Turkish Cyprus explained that women have been marginalized in the political process but sustainable peace in Cyprus can be achieved when both women and men are part of the negotiation and reconciliation process.

As the final speaker, I was invited to present the Watford Bridge of Peace, a project of the WFWP. The Bridge of Peace is a method used by the WFWP for the purpose of reconciliation. Women of conflicting backgrounds come together in forgiveness for the past and with hope and determination for the future. After the event of 9/11 and the imminence of the war in Iraq, I was concerned about the impact those events would have on the peace and stability of our world, including our town. I decided then to invite women from the Christian and Muslim community in Watford to take part in a Bridge of Peace, sisterhood ceremony. 40 women came, crossed the ‘Bridge’ and became Peace sisters. They pledged to learn about each other and work together to bring understanding and friendship between their communities. Later the Bridge of Peace was extended to include women from other backgrounds. We got involved in interfaith and co-founded the Watford Celebration an annual community event which brings together all the communities of Watford in a day of celebration and friendship. We supported the founding of the Watford Faith Leaders Forum with their motto ‘Being friends before needing to be friends’. The Mayor and High Officials have been supporting us all along as they recognize the benefit of our work in Watford.

Many questions and comments followed with a great interest on how the Bridge of Peace could be applied in the Middle East. The session lasted two hours and about 150 people attended.

You can view the full session at this link, the talk about Watford Bridge of Peace is at 1hour 14 minutes: https://www.youtube.com/watch?v=RB84OpjKmOw&feature=youtu.be